Analysts aren’t betting on high March-quarter Apple earnings, which will go public tomorrow, according to a Fortune survey of professionals and indies.

The majority of the 40 analysts Fortune spoke with agree that earnings per share would grow roughly 2.4% to $10.33. But in terms of revenue, the forecast is within Apple’s guidance, meaning: between $42 billion and $44 billion.

Even so, there are seven analysts who are betting on a great performance from Apple between January and the end of March: Daniel Tello of Deagol’s AAPL Model, Michel Contant of The Braeburn Group, Maynard Um of Wells Fargo, Ben Schachter of Macquarie, Ovi Popescu, independent, Scott Craig, Merril Lynch, and Patrick Smellie of the Braeburn Group.

At the bottom of the list there are two analysts, Credit Suisse’s Kulbinder Garcha and the Braeburn Group’s Sunil Shah, who believe Apple will actually report a drop in revenue tomorrow.

None of the 40 analysts expects much growth from Apple’s hardware product line. The only revenue streams expected to post a growth are iTunes, and Software and Services, with the consensus being around a quarterly revenue of $4.55 billion, up 10.6% y-o-y. 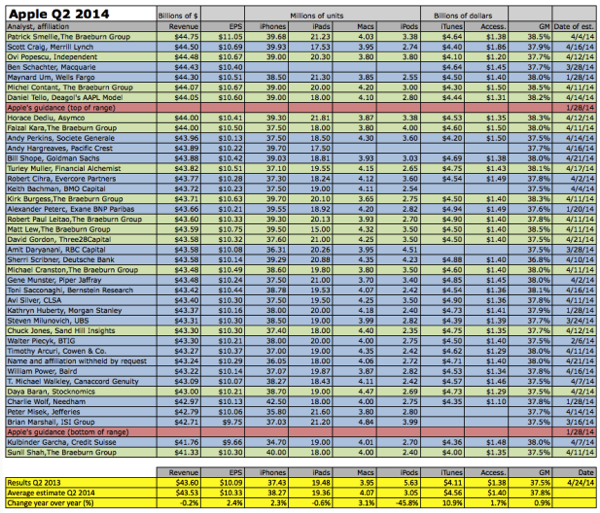