Apple-Redesigned iMacs Will Be Available for Sale as Scheduled [Update] 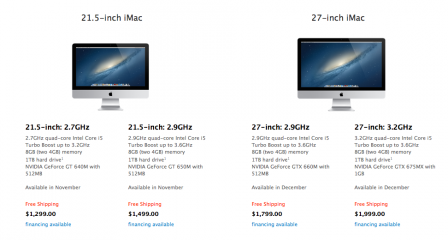 “Our sources say that Apple is already shipping new 21.5-inch iMacs to its distribution hubs across the United States and several other countries across the world. These sources also expect the 21.5-inch computers to be available to order from Apple’s online store by the end of this month. It is also likely that the new models will reach Apple’s physical retail stores by the end of November,” Mark Gurman writes.

The info shouldn’t surprise you though, as despite the rumor mill spilling information about delayed iMacs, the availability date remained unchanged on Apple’s online store: November for the 21.5?inch model, and December for the 27?inch model. Also, Apple has recently published its 2012 Holiday Gift Guide, which also includes iMacs, so it was kind of weird to see Apple introducing the redesigned iMac, only to then and tell us: “Hey guys! We’re sorry; this is what we can do, but you can’t buy it this year – maybe somewhere in 2013”.

Update: AllThingsD says their source says “The plan is still the plan,” for the new iMacs.