Apple Says to Reboot your iPhone Before Visiting the Genius Bar

If you have a problem with your iPhone and turn to the best place to take care of the issue — the Genius Bar at your local Apple Store — you’ll will now have to comply with an new requirement before being allowed to make an appoint to see a Genius. You will now be prompted to turn off and reset your iPhone (without the risk of losing any information) and see if the problem disappears. 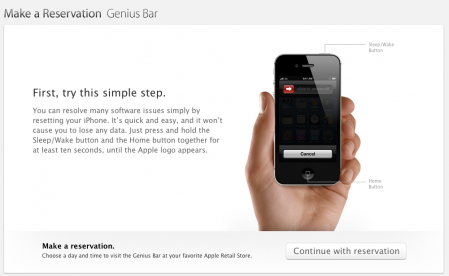 This troubleshooting step comes as a surprise, but Apple now requires iPhone users to do this in order to make a reservation through their Canadian website. As you go through the steps to reserve an appointment, you will be prompted by a page that says “First try this simple step”.

Those familiar with troubleshooting already know that sometimes the glitches you are experiencing can be fixed with a simple reboot, so Apple is now pushing iPhone users — and only iPhone users, as iPod, Mac, and iPad users don’t arrive at this page — to reset their device to see if you really need to make the reservation.

What I can imagine from this is that Apple was facing a significant percentage of Genius Bar appointments that only needed this simiple step to solve the issue.

[Via Cult of Mac]