While we don’t know the exact reason for the sudden drop, one thing is certain: Apple’s retail section has suffered some changes in 2012: earlier this year, John Browett was ousted, due to his mistakes and embarrassing moves, which the research firm has suggested have affected Apple’s online store and consumer satisfaction.

ForeSee surveyed 24,000 consumers between Thanksgiving and Christmas, and as the below image shows, Apple’s consumer satisfaction decline is one of the biggest declines over time. 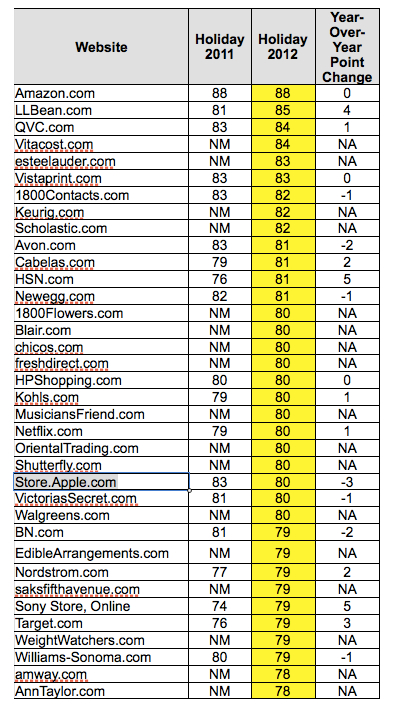 “The luster of Apple is fading a bit,” Larry Freed, president and CEO of ForeSee told AllThingsD.com. “Keeping up with consumer’s rising expectations of the online customer experience is no easy task, but not keeping up can lead to decline in loyalty, word of mouth and revenue growth. In particular, even though Apple gets top dollar for their products, price is an area weakness for the company when it comes to satisfaction. Apple’s site might be due for some changes, and the usefulness, convenience and variety of features on the site presents the biggest opportunity for Apple to improve the customer experience.”