The world’s largest buyers of semiconductor chips in 2013 may sound familiar to anyone involved in the tech world. Yeah, you guessed right: Apple and Samsung – the fiercest rivals spend the most. In fact, the two combined account for about 14% of total spending in 2013, reports IHS.

Looking back to 2013, IHS Suppli found that Apple has outspent Samsung by more than $8 billion, but its growth of 17% compared to a year previously was smaller than Samsung’s 30%.

“As in 2012, Apple and Samsung were the top semiconductor spenders in 2013 among original equipment manufacturers (OEM) making more than $1 billion in revenue,” said Myson Robles-Bruce, senior analyst for semiconductor spend and design analysis at IHS. “Apple was in first place with chip spending in 2013 of $30.3 billion, outspending runner-up Samsung’s $22.2 billion by more than $8 billion. However, the South Korean electronics titan attained the largest spending increase on chips of any Top 10 OEM last year, up almost 30 percent from 2012 levels, compared to a smaller expansion of 17 percent on the part of Apple.” 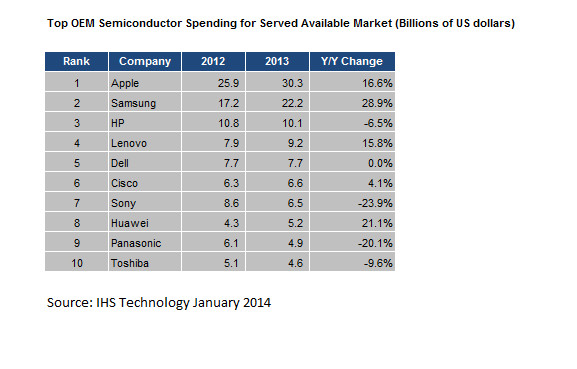 In the top five we find familiar names such as Hewlett-Packard (third place), with $10.1 billion in spending, Lenovo (fourth place), with $9.2 billion, and Dell (fifth), with $7.7 billion. This year, Huawei (eighth place) made it into the top five due to its growth in the Chinese smartphone market.