Looks like Apple is now under high selling pressure with more reports emerging that supplier orders have been cut, as indicated by several analysts’ reports followed by continued drop in Apple’s share price (AAPL) today, Fortune is reporting. Topeka’s Brian White, who monitors these things on a monthly basis, believes that February’s report was the worst on record for Apple. 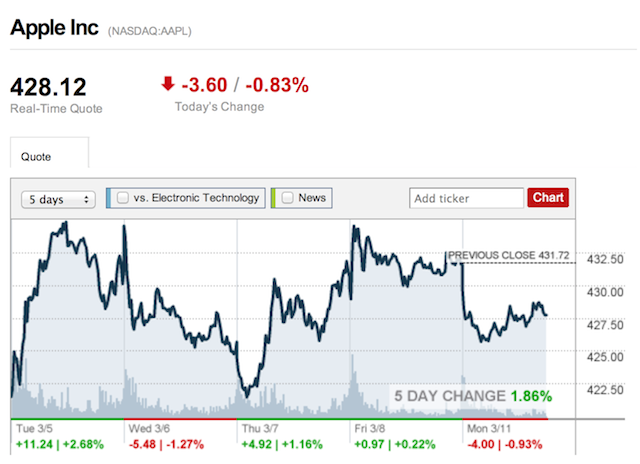 Fortune has shared some excerpts from several analysts’ Monday notes, according to which February sales for Apple fell by 31%, much worse than the average 8% decline over the past seven years. Brian White notes that “The Apple Monitor delivered the worst February we have on record”. CLSA’s Avi Silver noted that Apple shares continue to drop due to weaker iPhone trends. However, he added that new products (including iPhone mini) coming this year, will return Apple to EPS growth and that increased cash returns could arrive in the coming few weeks.

Avi Silver also said that a larger screen iPhone is unlikely in 2013, which could impact high-end smartphone share, while lowering his price target to $505 from $575.