The UPSTO has granted Apple a patent for the GUI used in all versions of the iOS Maps app since the software was first introduced in 2008. 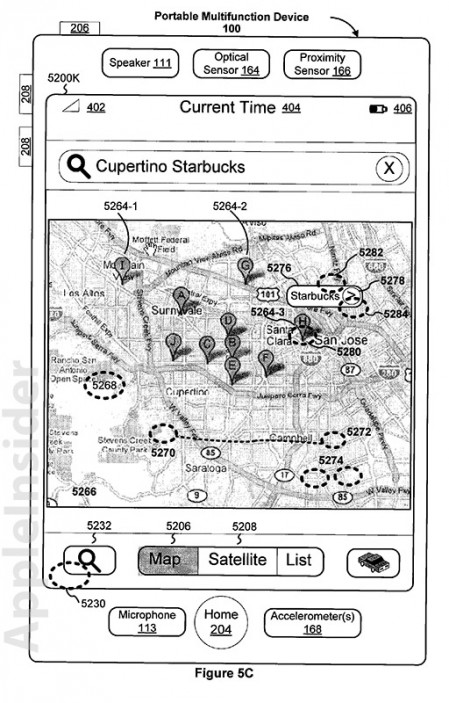 Apple’s US Patent No. 8,302,033 for “Touch screen device, method, and graphical user interface for providing maps, directions, and location-based information” was filed a month before iPhone OS 2.0 launched, and sought to improve GPS systems of that time by using the iPhone’s multitouch display, built-in GPS receiver and wireless communication abilities. iOS 6 Maps uses the same UI structure Apple introduced with the iPhone OS 2.0 in 2008, running on iPhone 3G.

Alongside dropping physical buttons, Apple’s innovation with its Maps application (which was powered by Google back then) is a totally new user interface that responds dynamically to the users’ request: sliding on the display, the user navigates on the maps instead of using buttons. Another innovative feature, as highlighted by the ‘033 patent, is bookmarking: users can access bookmarked locations, recent searches, and a list of contacts by touching their on-screen representations, and as a result their location is displayed on a digital map.

The ‘033 patent also covers the zoom in and out gestures and the great options menu behind the maps screen, which could be accessed by tapping the bottom right corner, resulting in a roll-up animation.

As we mentioned above, the patent covers only the UI structure, the skeleton of the Maps application Apple now uses, as it terminated its contract with Google. Fact is, the GUI assets are familiar for those who used both iOS 5 and iOS 6 Maps, and as the 2008 patent shows, the base is a four-year-old GUI invention. iOS 6 Maps, however, was a disappointment for many users, although the available alternatives have shown it isn’t that bad after all.