A report by Apple Insider points out that Apple has been awarded a universal adapter patent for media players that will communicate with accessories using wireless technology. This may actually provide a solution for all cable and adapter incompatibility issues faced by iPhone 5 buyers that sports the new 8-pin Lightning connector, suggests the source. 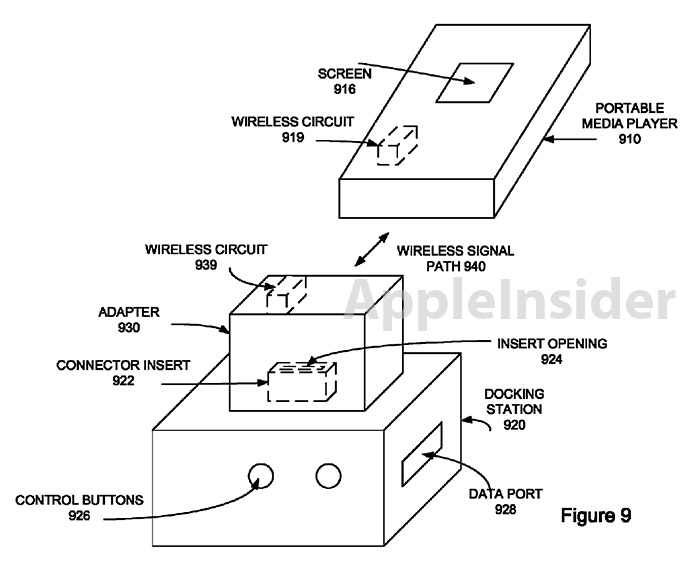 The U.S. patent # 8,280,465 for “Wireless adapter for interfacing between an accessory and a device”, that has been awarded to Apple today, details the ways in which a wireless adapter could interface between a device and an accessory. It suggests that such an adapter could include one wireless interface to talk to the device and a second wireless interface to talk to the accessory, either using Bluetooth or Wi-Fi. This would allow devices with different interfaces communicate with each other, thus reducing the need to buy a host of physical cables.

The patent provides for an adapter with a built-in wireless transmitter which can communicate signals “between the accessory and the portable media player,” while another embodiment provides for the reverse. Also provided for is an incompatibility with wireless protocols, such as Bluetooth and Wi-Fi, both of which can be addressed by the adapter’s internal circuitry.

As for accessory authentication, wireless signals can be sent to a “Made for iDevice” product from an iPhone or iPod, allowing Apple to stymie third-party manufacturers attempting to build royalty-free products.

It is not yet known whether Apple will ever launch such an adapter but it appears that such a device could solve the issue of accessory incompatibility with newer iOS devices.