The day after UK judges declared Apple’s “apology” on its website was a “breach of the order”, the Cupertino company removed the “non-compliant” post and published the first newspaper adverts to comply with the court’s ruling. 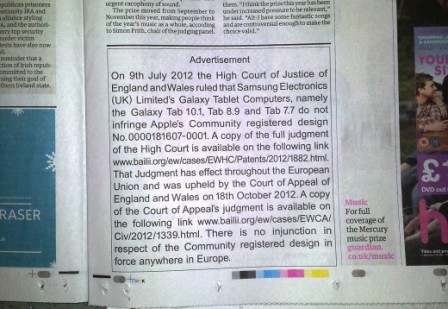 The Next Web has spotted Apple’s revised advertisement in this morning’s Guardian. The advert includes the same statement the company posted on its website, except the comments that caused yesterday’s hype surrounding the notice. As noted by Matt Brian, the advert seems to be printed as requested by the original ruling: 14 pt Arial font.

Apple needed to act fast: the UK judges’ first reaction to its post was, as cited by Bloomberg, “I’m at a loss that a company such as Apple would do this. That is a plain breach of order.”

Apple received a 24-hour deadline to remove the notice, as its request for a 14-day delay was rejected. As of this morning, the post is no longer available on the website, but Apple needs to update the Samsung notice on the front page of its main, Apple.com website within 48 hours. The notice needs to be printed in 11 pt Arial font.

Although we don’t have information about when Apple’s website will be updated with the revised notice, stay tuned — we’ll keep you posted.

The NFL has announced that Apple Music is now the official partner of the Super Bowl Halftime Show. 2023's Super Bowl LVII will mark the first in which the Cupertino company replaces Pepsi in a multi-year partnership with the NFL. According to the NFL, the deal with Apple Music is focused on "bringing Apple's creativity...
Steve Vegvari
16 hours ago