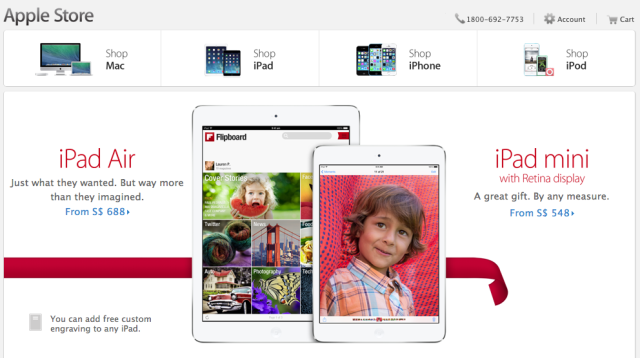 Singapore may not be known as one of Apple’s priority markets – it doesn’t even have an official Apple Store – but the company’s Singapore entity Apple South Asia Pte Ltd. recorded an impressive $14.9 billion in revenue in fiscal 2012. To put that amount into perspective, it’s more than it would have received if each of the country’s citizens (5.3 million) had bought an iPhone 5s, an iPad Air, and a MacBook Pro. But why would Apple open up an entity in the city state when there are other more important markets? If you knew the corporate tax there was 6%, it would help you guess the answer, according to Reuters.

A U.S. Senate report detailed how U.S. companies structure their operations to book the majority of their non-U.S. profits in low tax jurisdictions. The report was published in May and offers a detailed description of the circuitous legal trip Apple’s products manufactured in China and destined for Asian markets take.

The “title”, or legal ownership, of the shipment is bought first by a unit in Ireland called Apple Sales International, before being sold on to Apple South Asia Pte Ltd in Singapore.
The Singapore unit, which is owned by another Irish entity – Apple Operations International – then sells the products to other Apple subsidiaries in Asia, third-party resellers or internet customers. The gadgets may never even touch Singapore shores, according to the Senate report.

But Apple isn’t the only company taking advantage of Singapore’s low tax rates. Microsoft is also on the list, among other companies. The difference between Apple and Microsoft is that the latter’s entity has no employees, but still shares 10% of the company’s research and development activities. Apple, on the other hand, has more than 2,000 employees in Singapore.

But the wind of change is blowing in Singapore as well. The shock waves of the U.S. tax dollar scandal have reached Ireland and now Singapore: the city state is forced to review the level of transparency in its tax incentive schemes and get stronger justifications from companies on their transfer pricing arrangements.

[…] revenue-hungry governments are looking to impose tougher rules on so-called transfer pricing that could make it harder for firms to trade goods, services or assets between their Singapore and overseas entities.

As a result, accountants warn that the city-state will need to review the level of transparency in its tax incentive schemes and get stronger justifications from companies on their transfer pricing arrangements to fend off challenges from other jurisdictions.

It remains to be seen how the updated tax incentives will affect Apple. Will it move its operations to another country? It certainly doesn’t appear to do so in Ireland….