Following WSJ’s claim from yesterday that Apple has cut orders for iPhone 5 displays to half due to “weaker than expected demand”, Apple’s share price (AAPL) has slipped to a low of $487.25 (via CNET). Having hit an all-time high of $705.07 in September last year, Apple’s stock has dropped below the $500 mark for the first time in almost a year. 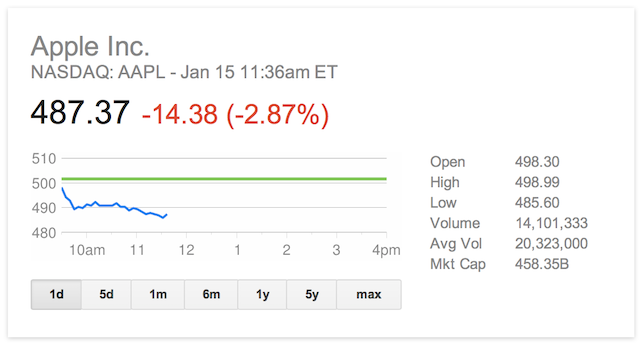 Sterne Agee analyst Shaw Wu wrote in a research note to investors earlier today that Apple’s reported cuts to component orders have nothing to do with weak demand. Instead, the declining orders are believed to be the byproduct of improved yields. However, Wu’s claims have failed to shake worry among investors, dipping the stock value to a level below $500.

Apple’s stock has been hit with a downward trend over the last several months. In the last three months, Apple’s shares are down 22 percent. The company’s stock is also far off its 52-week high of $705.07. Apple’s 52-week low is $419.55 — not too distant from its current price.

The bearish view investors have taken on Apple’s stock stands in stark contrast to analyst estimates. According to data from Marketwatch, which tallies the research from 54 analysts, Apple has an average target share price over the next 12 months of $735.

Meanwhile, Baird analyst William Power has said that Apple’s shares could rise to $750 in the next 12 months.

Update: AllThingsD reports their sources say the slash in component orders are a possible result of Apple considering IGZO technology for displays (Digitimes said the same thing in December):

Another possible explanation: The reduction in orders is the result of a coming switch in display technology. Sources close to Apple tell AllThingsD that the company has been evaluating IGZO displays for use in its iOS devices, though they declined to say what the results of that evaluation have been.