Apple’s Stock (AAPL) is seeing a rise on speculation that the company plans to raise dividend significantly, as tomorrow marks the first anniversary of Apple’s quarterly dividend and accompanying share buyback plan. According to Bloomberg, analysts are expecting Apple to boost its dividend by more than half, raising its annual payout to $15.7 billion. 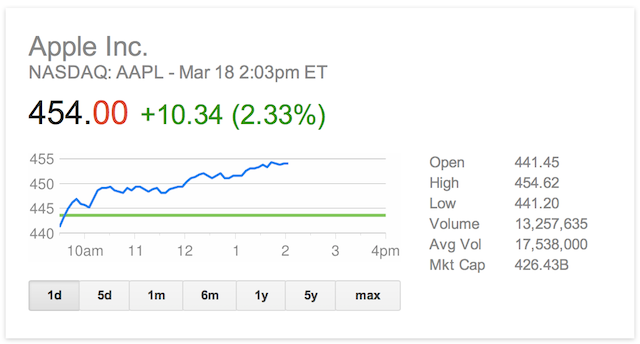 Many companies announce dividend changes once a year, fueling speculation about Tim Cook’s plans as Apple approaches the anniversary of last year’s announcement, which came on March 19. As a result, Apple’s shares rose nearly 2% in early trading today, following reports that the cash-rich company could boost its dividend by more than 50 percent. However, it doesn’t necessarily mean that Apple will do anything with its quarterly dividend tomorrow, though it’s clearly in its best interests to do something to appease shareholders.

“The accumulation of cash has become excessive,” Brian White, an analyst at New York-based Topeka Capital Markets Inc., said in an interview. He rates the shares a buy, with an $888 price target. “It doesn’t matter which bearish scenario you forecast, they’re never going to need this much cash.”

Einhorn’s Greenlight, which says it holds more than 1.3 million Apple shares, is urging Apple to issue high-yielding preferred stock to carve out more cash for investors.

White says that Apple needs to attract new investors, and one way to do that is to pay out a bigger dividend.