Fortune is reporting that Barclays and Citi have both lowered their price targets for Apple’s stock (AAPL), while Merrill Lynch is sticking with its $570 price target. However, Merill has found some “worrisome trends” while searching on Google Trends, which tracks the frequency of search terms. 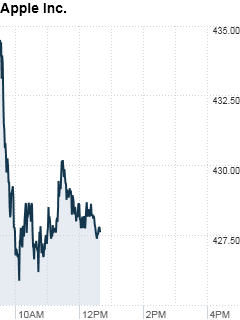 After meeting with two senior VPs at Apple, Phil Schiller and Peter Oppenheimer, Barclay’s Ben Reitzes has lowered his AAPL price target to $530 from $575. However, he insists that his 8% reduction had nothing to do with what they said. Also, Citi’s Glen Yeung, Jim Suva and Walter Pritchard have lowered their near Street-low $500 price target to $480 based on evidence of “reduced demand to Apple’s suppliers” for iPhone 5 and new iPad parts.

Below are the Google Trends findings by Merrill Lynch’s Scott Craig:

1. In iPhone 5 cycle, search volume for the keyword “iPhone” is moderating sooner and normalizing at lower levels vs. previous cycles. This could be explained by competition and Apple’s greater efficiency in global product rollout.

2. Query volume for the iPhone remains above Samsung’s high-end models, but the gap is narrowing. The iPhone is still the bestselling model globally, but the difference between iPhone 5 units and Galaxy S3 & Notes 2 units narrowed to 8mn in Q12 vs. ~17-18mn in the last cycle.

3. Query volume for the iPhone is beginning to trail Samsung Galaxy in some emerging markets (China, India), perhaps due to Apple’s lack of exposure in the low/mid-range segment.

The average analyst’s price target for AAPL however remains at $630.

Apple is currently on track to double iPhone exports from India by March 2023. This pace was first kickstarted in April and is continuing as India proves to be a major asset in Apple's diversification of its supply chain. In the five-month span since April, Apple has gone on to cross the $1 billion mark...
Steve Vegvari
18 hours ago