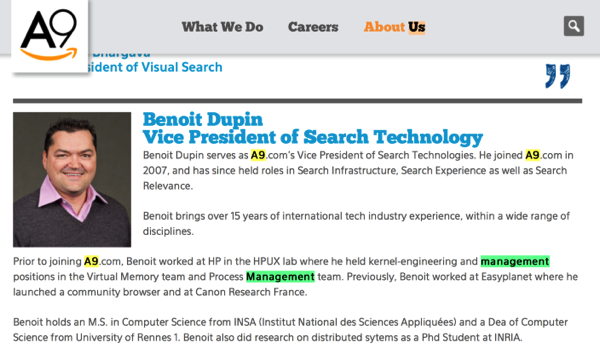 Apple has lured away another executive for its Maps team: Benoit Dupin, Vice President of Amazon’s A9’s Search Technology group, has quit to join the iPhone maker to become director in charge of Maps search.

The A9 group is in charge of product search and advertising throughout Amazon’s giant store, reports 9to5Mac. Dupin has had experience with search infrastructure, search experience, and search relevance, which propelled him to the VP of Search Technology position. Before joining Amazon, Dupin held positions at HP, Easyplanet, and Canon.

While Dupin’s exact role is not yet known, his expertise might be valuable for improving Apple’s Maps, iTunes Store, and App Store product search. All of the aforementioned products have been criticized for their unreliable results.

Apple Maps is said to feature a major overhaul with iOS 8 – the result of the company’s effort to lift the service to its usual standards – and search could be one of them. Also, we have seen that Apple is working on improving search in the App Store as well, adding a new search suggestions feature.