CNBC’s Squawk Box hosted Berkshire Hathaway’s Warren Buffett this morning (via Fortune), who added his voice to the hype around Apple’s stock price and cash pile. 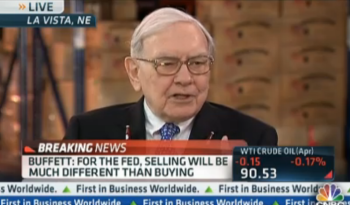 During the special three-hour segment with Becky Quick, Warren Buffett was asked about Apple and about his position on the company’s current situation. Buffett’s advice was to basically ignore all of it:

“I don’t own any Apple and I haven’t, though I did talk with Steve Jobs a few years ago about what they might do with the cash. The best thing you can do with a business is run it well, and the shares will respond. There have been all kinds of times when people have criticized us [Berkshire], saying you could do this thing or that thing.”

As for Einhon’s “silly sideshow” pressure for Apple to issue preferred shares, the prominent investor said he would ignore Einhorn as well:

“I would ignore him. I would run the business in such a manner as to create the most value over the next five to ten years. You can’t run a business to push the stock price up on a daily basis. Berkshire has gone down 50% four times in its history. When that happens, if you’ve got money you buy it. You just keep working on building the value. I heard form people each time [Berkshire shares went down], saying why don’t you do this or that. Pay a dividend. I think Apple’s done a good job of building value. They may have too much cash. Now one reason they have so much cash is two thirds of it has not yet been taxed.”

Buffett even recalled a discussion he had with Steve Jobs some while ago, on the stock buyback topic.

Apple is in some hot water once more as a federal lawsuit regarding its AirTags has been issued in San Fransisco court. Two women filed to sue the company, with one alleging that an AirTag was used by an ex-boyfriend to stalk them. The lawsuit was filed this week and largely criticizes Apple's safety protocols...
Steve Vegvari
5 hours ago