Billionaire Carl Icahn Buys Another $500M Worth of Apple Stock 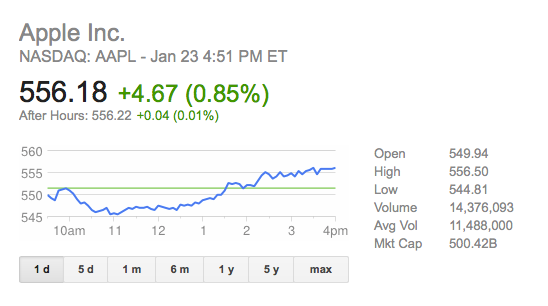 After tweeting just the other day that he had spent $500 million on Apple stock, Carl Icahn has revealed that he has invested another $500 million, Reuters reports. This brings his total investment to $3.6 billion.

Also, the billionaire tweeted that “if board doesn’t see Apple’s no brainer value, we sure do,” and inked a very long letter to Apple’s shareholders.

Bought another $500mil of $AAPL tday, bringing our total to $3.6 billion. If board doesn’t see AAPL’s ‘no brainer’ value we sure do.

Today we have put out a seven page letter to $AAPL shareholders discussing why buyback should be markedly increased: http://t.co/O7F8S7BzWg

Some highlights from the letter:

Even if the story ended with Apple’s existing product and software lines, we would still choose to make Apple our largest investment. But there is more to the story! Tim Cook keeps saying that he expects to introduce “new products in new categories” and yet very few people seem to be listening. We’re not aware of a single Wall Street analyst who includes “new products in new categories” or new services in any of their financial projections, even though Apple clearly has an impressive track record of such new category product introductions, even if it does so rarely. Apple released the iPhone in 2007 and the iPad five years later in 2012, both so extraordinarily successful that today they represent the majority of the company’s revenue. Tim Cook’s comments, along with advancements in enabling technologies, lead us to believe that we may see in the not too distant future what new groundbreaking products they’ve been working on developing in Cupertino these last several years.3

Carl Icahn’s tweets seem to have highly influenced Apple’s stock price recently. The investor has met several times with Tim Cook, he has regularly spoken with Peter Oppenheimer, Apple’s CFO, and he has pressured the company for a $150 billion share buyback.