Estimating iPhone sales for Q4 2012, the quarter that ended Sept. 29, Fortune reports that Apple sold approximately 27 million iPhones during the period. The report highlights that for the first 10 weeks, unit sales were depressed by customers holding out for the new iPhone, but for the last two weeks, the company sold iPhone 5 units “as fast as it could make them”. 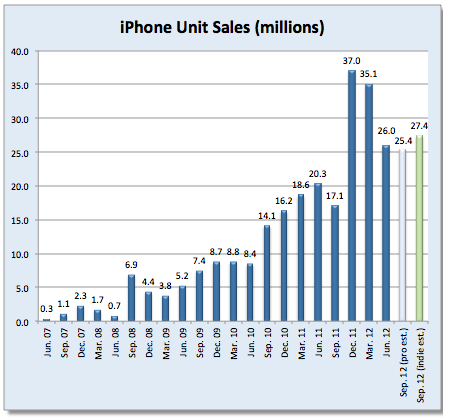 How fast Apple actually sold the iPhone 5, or how slow sales were before its release, can only be guessed, notes the source. However, 60 estimates that were received  from Fortune’s “pool of Apple analysts” including 30 professionals and 30 independents, were all over the lot.

In a good quarter — like fiscal Q2 2012, when Apple sold 35 million iPhones — the device will account for nearly 60% of the company’s total revenue. In a bad quarter — like Q3, when the 26 million units Apple sold accounted for 46% of its revenue — the iPhone will drag the company and its stock price down with it.

The low estimate this quarter, 21 million, was submitted by an independent — Shafiq Shamji of the Braeburn Group. And before he lowered his forecast to 26.5 million on Monday, William Blair’s Anil Doradla was sitting on a Street-and-independent high estimate of 33 million.

The average among both groups is 26.4; the median 27 million.

We’ll find out whose numbers are closest to the mark when Apple reports its earnings on Thursday, Oct. 25.