Google is developing plans to follow Apple’s example and open its own retail stores in the US, the Wall Street Journal says, citing people familiar with the matter. The story seems to reiterate what 9to5Google had reported a couple days earlier. 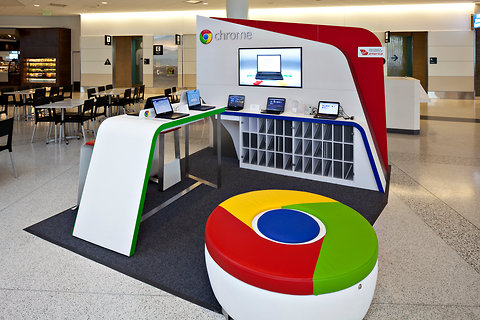 From what the WSJ’s sources reveal, these stores would sell Google-branded hardware, but there is no information about where and when these stores would open, and the possibility that the plan will not materialize until next year is also high.

As Tim Cook recently said during the Goldman Sachs interview, the stores are “the face of Apple” for almost all of their customers. Google seems to be following Apple’s example, as these locations where people can test out devices before buying them has contributed significantly to the sales of iPhones and iPads. Even Microsoft has decided to open its own retail outlets.

Over the past year, Google has promoted Chromebooks in dedicated areas within some Best Buy Co. retail stores in the U.S. and Dixons Retail DXNS.LN PLC outlets in the U.K.

As WSJ sources point out, “the idea of opening retail stores has long been debated as the company has become a major player in mobile devices”. This, however, signals a change of heart for the company co-founder and now CEO Larry Page’s position regarding brick and mortar stores.

The fact is, with the acquisition of Motorola Mobility and the launch of its Nexus-branded smartphones and tablets, Google went beyond providing Web services and software, and this expansion represents a logical move.

Apple is reportedly scrapping its initial plans to increase iPhone production this year due to lower-than-expected demand. Following the launch of its new flagship, the iPhone 14 series, Apple is now reconsidering the scaling of its production. As reported by Bloomberg, Apple has reached out to its supply chain partners. Initially, the Cupertino company is...
Steve Vegvari
9 hours ago

Logitech is launching a brand new line of 'Designed for Mac' keyboards and mice. The announced products are specifically aimed at servicing Logitech's Apple users. The lineup of 'Designed for Mac' devices includes the MX Mechanical Mini for Mac Keyboard. This keyboard offers the traditional Mac layout. It features backlit keys and is USB-C rechargeable....
Steve Vegvari
10 hours ago