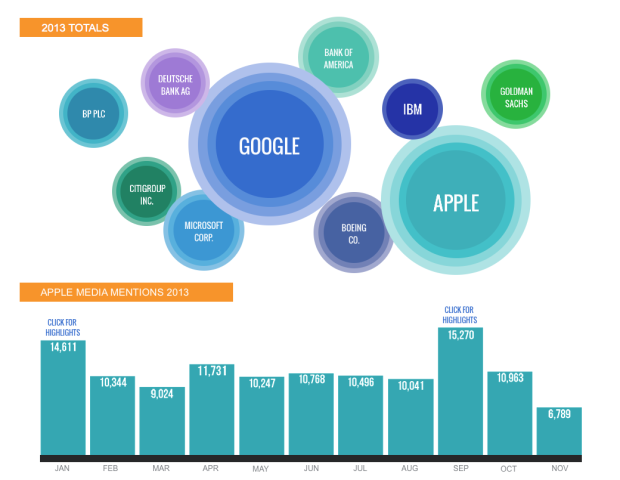 Apple is no longer the most-discussed company worldwide, a new infographic from Dow Jones highlights. The data was gathered from each story published in 2013 through its growing database of global English-language publications, reports the Business Insider.

Apple surrendered its crown to Google this year after Google topped the last year’s list with 165,100 mentions. An interesting highlight of this year, however, is that Apple’s peak months were January (14,611 mentions), April (11,731), and September (15,270).

In third place we find Microsoft, but the mention frequency is much lower compared to the other two (84,174 stories), while the Bank of America grabbed fourth place. Boeing, however, managed to rank fifth on the Dow Jones Top Media Mentions list.

Below you can find the full list of Dow Jones 2013 Top Media Mentions.

The Apple TV+ original series Shrinking is now available to stream in Canada. Jason Segel and Harrison Ford star in a comedic drama series centred around a therapist that decided to approach his role in a new way by taking the filter off and giving unbridled honesty and advice. Shrinking stars Segel as James Lair,...
Steve Vegvari
18 hours ago