How Domino’s Pizza Embraced Technology to Turn the Company Around

Domino’s Pizza wasn’t always the company it is today. When current Chief Marketing Officer Russell Weiner took his position at the company in October 2008, leaving Pepsi behind, its stock price was at a record low — $2.83 a share — while today it is above $72. So what’s the key to its success? Fast Co. Create has the details.

Apparently, in less than six years, Domino’s has reinvented itself by taking two major steps: One, after publicly admitting that its pizza sucked, it revamped the menu and ingredients, and two, it made online ordering (via mobile) a cornerstone of its business.

Despite the fact that we are talking about a pizza company, the single biggest department at Domino’s headquarters apparently is the IT department, and internally they mention the brand as a technology company that sells pizza.

The shift that brought today’s success to Domino’s was its focus on the digital world: They realized that customers want to order their pizza online, and they have built their entire strategy around this fact. 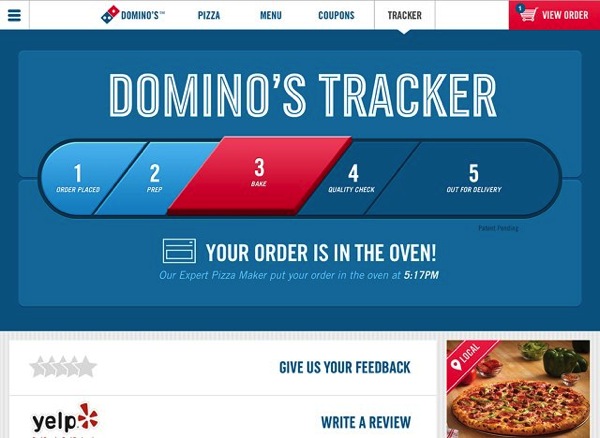 There are two types of digital experiences the brand looks to build. Some are proprietary–pizza tracker, customer profiles, Think Oven–while others, like the pizza builder, are attempts at improving on industry standards. “So we look at things no one else has, but then we also watch for how we can create best in class experiences for things that have been out there,” says Weiner. “Apps, for example, where our objective is to always have a higher rating than our competition.”

“Pizza Tracker is about tracking the progress of your pizza, but it’s also the ultimate in accountability and transparency,” says Weiner. “Profiles are the ultimate in easy ordering–you can order a pizza in five clicks or 30 seconds. Think Oven says we listen to consumers and we want their feedback. So these are all digital ideas or tools, but are based in a brand philosophy that goes much deeper. The idea of being honest and open is something all consumers want whether they use our pizza tracker or not.”

Becoming a technology company has had the expected results: After launching the Pizza Turnaround, same-store sales grew by 14.3%, and last year Domino’s generated $2 billion in annual global digital sales, of which 35% was driven by mobile sales. And by the way, Domino’s opened their 11,000th store at 71 Charing Cross St. in Brantford earlier this month.

In a recent interview, Apple engineer Esge Andersen discussed how the company achieved improved sound quality regarding the AirPods Pro 2. Much of the improvements came without the integration of lossless audio and it is all thanks to improved airflow instead. Speaking with What Hi-Fi?, Andersen pulled back the curtain about the improvements to audio...
Steve Vegvari
24 hours ago