The International Data Corporation (IDC) says Samsung and Apple are both pushing computer, smartphone, and tablet sales up, as the worldwide smart connected devices (all of the aforementioned devices) grew 27.1% on a year-over-year basis to a record 303.6 million shipments valued at $140.4 billion dollars. 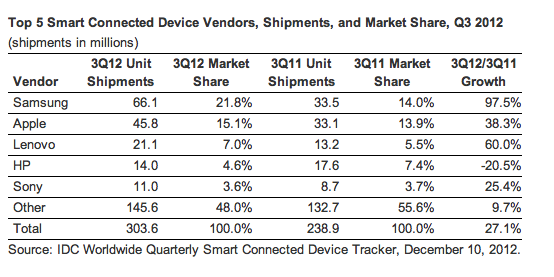 While it shouldn’t come as a surprise, the research company’s recent numbers are an interesting read for anyone interested in tech, although a bit of skepticism is always welcome.

As the IDC report highlights, the holiday season growth will be driven by smartphones and tablets, which are expected to record nearly 40% and 60% growth y-o-y, respectively. As for the vendors, Samsung continued to maintain the top position, retaining 21.8% of all shipments on a global scale, while Apple remained in second spot in the third quarter, with 15.1% market share, followed by Lenovo and HP.

Looking forward, the research firm estimates the number of smart-connected devices to grow and surpass 2.1 billion units by 2016, driven particularly by strong holiday sales, with smartphones and tablets to dominate growth, pushing desktop computers behind.