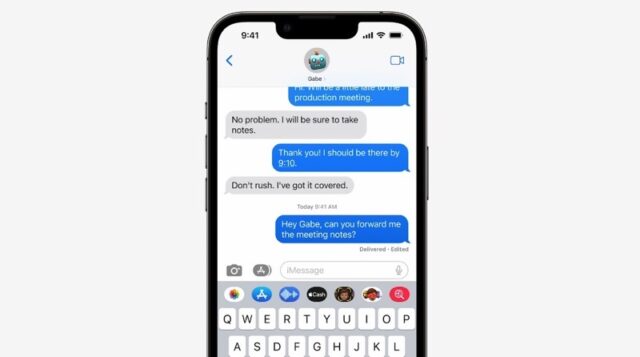 During WWDC 2022, Apple revealed one of the core features iOS 16 brought to users is the ability to edit messages on the iMessage app. Now, it appears as though the latest version of the iOS 16 beta is mitigating concerns about backward compatibility. iOS 16 is said to resend edited messages to users running an older version of the iPhone software.

Users are starting to gain access to iOS 16 beta 2. As such, developers have begun to realize that the software’s editing function for iMessage differs depending on which version of iOS is being used on the recipient’s device.

If a user edits a message via iMessage on an iOS 16 device, the user on the other end can see that a message has been altered. iMessage clearly shows a notice that the message was “Delivered” and/or “Edited.” However, as reported by 9to5Mac, users running iOS 15 or older will receive a new version of the message with the label “Edited for.”

According to the report, if a user receives the newly edited message on older software, the original will still remain in the conversation. Thus far, Apple has not found a way to provide a solution to this issue. It’s far from the most pragmatic solution. However, it does appear as though this is the only solution available ask iOS 16 becomes more readily available.

That said, this issue shouldn’t affect too many iPhone users. iOS 16 will become available on older devices going all the back to the iPhone 8. Therefore, this roundabout solution to iOS 16’s edited messaging feature will only affect those using an iPhone older than 2017’s iPhone 8. Plus, there’s no telling whether Apple will find a more practical solution over resending edited messages via newer software in the future.