Despite all the errors and flaws in Apple’s recently introduced iOS 6 Maps app, it is way ahead of the competition in terms of technology as it uses vector maps that allows fast, sophisticated navigation of both 2D and 3D views. Turns out the iOS 6 Maps app not only reduces 80% data usage by using vectors, but also lets automatically caches a large surrounding area for offline browsing and GPS navigation in an area without data connectivity (via Apple Insider). 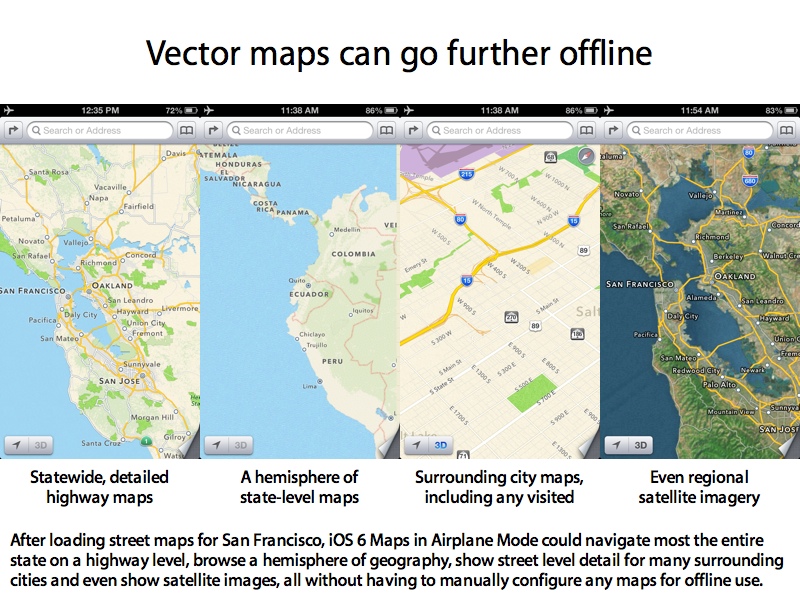 Comparing with Google maps in iOS 5, map tiles of hardly 10 mile radius would load around the area being browsed at a couple zoom levels for offline browsing. However, iOS 6 Maps app can load an entire continent of high level maps for offline viewing e.g when loaded in San Francisco, you can browse north from Anchorage, Alaska to Lima, Peru and from Honolulu, Hawaii to Montréal, Canada, as tested by the source.

“At a highway level detail, we could actually navigate most of California, and on a simplified level, the western half of the United States. There were detailed street-level maps available of areas we’d never even looked at while online, as far away as Salt Lake City, Utah (about 740 miles or 1200 km east). Thanks to vectors, you can even view these offline maps in 3D perspective.

Even more surprisingly, iOS 6 Maps also loads basic satellite images and major city labels for the entire globe. When you switch to hybrid mode while offline, Maps overlays its cached vector road paths and city labels over higher quality satellite images that let you visualize the Earth’s topography in useful detail over more than a 100 mile (160 km) area, also in 3D perspective view”.

This vastly expanded new capability allows travelers to load detailed maps for a very large area and navigate around via GPS, which remains active even if you turn mobile roaming off. As of now, there is no real alternative vector maps app for iOS 6.

If Google’s latest version of Android Maps is any indication of what it will offer iOS users, it needs to put a lot of work into its vector maps imaging to catch up to Apple’s technology in Maps.