iOS 6 Siri Only Half as Reliant on Google as Previously

Turns out Apple has distanced itself from Google much more than we thought. With iOS 6, Apple didn’t just drop Google Maps and YouTube, but reduced Siri’s reliance on Google by 50%. 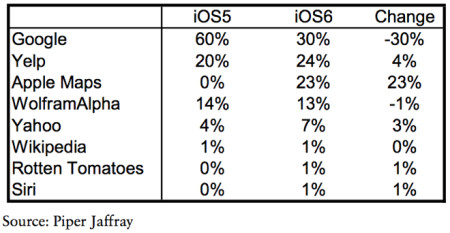 According to a Piper Jaffray test (via AppleInsider) back in June, Google was responsible for about 60% of the data returned by Siri’s queries. At the time, the official mobile operating system was iOS 5x. Now, with iOS 6, Google is responsible for only 30% of all data.

“The biggest change in query resolution to Google was the removal of Google Maps in iOS 6, as 23% of queries resolved to Apple Maps,” analyst Gene Munster wrote on Thursday. “Yelp and Yahoo! also benefited slightly. Net-net we view this as a slight negative for consumers on Apple products as we view Apple Maps as an inferior product to Google Maps.”

An interesting note here: Piper Jaffray also tested Siri and Google’s latest voice-driven assistance, Google Now, head-to-head only to find that Siri may not be so advanced after all (see chart below). 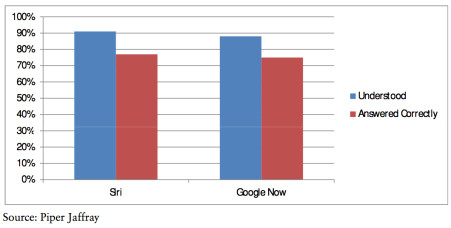 As Gene Munster points out, Siri outperforms Google Now in local search and operating system-level commands, while Google Now excels in navigation and fetching information, which isn’t a surprise, as Google’s “knowledge” is powering it.

“For example, Siri enables full control of the music application via Siri, but Google Now does not understand all song change/pause commands,” Munster said. “We believe Google will eventually strengthen its ability to control the OS in future launches.”

While both Siri and Google Now performed well, and the latter is catching up with Siri, both of them have several things lacking, and commerce is one of these areas. Gene Munster, though, believes that since Siri is still in Beta [sic], future updates will likely enable the option to search for local deals by partnering up with Groupon or Living Social.