Yesterday, an analyst report highlighted that Samsung’s Galaxy S III has knocked off the iPhone 4S to become the top-selling smartphone during August 2012. However, the latest numbers from comScore continue to reflect Apple’s steady growth in the mobile market, outgrowing android once again just like it did during the quarter ending in June 2012. 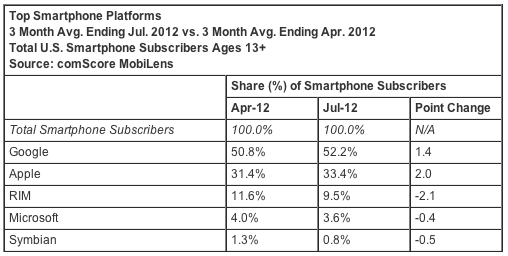 More than 114 million people in the U.S. owned smartphones during the three months ending in July, up 7 percent versus April. Google Android ranked as the top smartphone platform with 52.2 percent market share (up 1.4 percentage points), while Apple’s share increased 2 percentage points to 33.4 percent. RIM ranked third with 9.5 percent share, followed by Microsoft (3.6 percent) and Symbian (0.8 percent).

Since Apple has already confirmed the iPhone 5 launch event for Sept 12th, analysts believe the Cupertino giant is expected to achieve record-setting sales during the September quarter.