iPad Magic Keyboard May Include Slot Hinge For Apple Pencil, According to New Patent 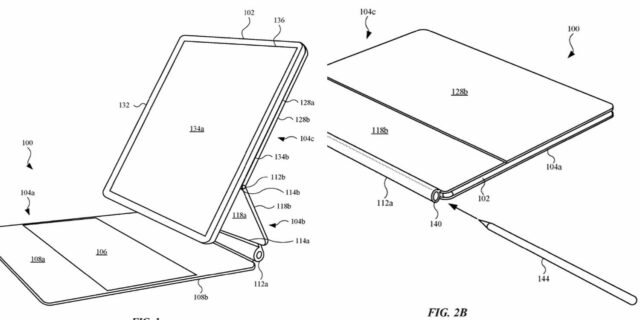 An upcoming model of the iPad Magic Keyboard may finally address some user complaints. A new patent suggests that the Magic Keyboard will include a slotted hinge, developed to house the Apple Pencil.

Spotted by 9to5Mac, the new Apple patent appears to solve an issue many users have experienced when travelling with their iPad and Apple Pencil. Although the Apple Pencil can be mounted on the side of the device via the magnetic strip, it’s not as safe and reliable as some users hope.

The new patent, under the title “Accessories for portable electronic devices”, was published on May 26th. Although the patent’s description does not refer to housing a stylus, it does read as followed:

The photos of the patent do depict a hollowed hinge with a stylus pointed towards the middle. A stylus is referred to in a later segment of the patent filing, which says:

“Accessory articles in accordance with some embodiments described herein can also include other mechanical or electronic features that provide additional benefits to the portable electronic devices. As non-limiting examples, first, a hinge assembly of an accessory article can have an elongated hollow body that can serve as a retainer to receive a digital pen such as a stylus or another interactive tool that can be used with the portable electronic device.”

Although the file was published on May 26th, the patent was initially filed back in 2017. Clearly, Apple has been developing a new Magic Keyboard, supporting the Apple Pencil in some capacity for a number of years. The big question remains of whether or not the hollowed-hinge model will ever see the light of day.