New Images of Braided Lightning to USB-C Cable Surface, May be Included With iPhone 12 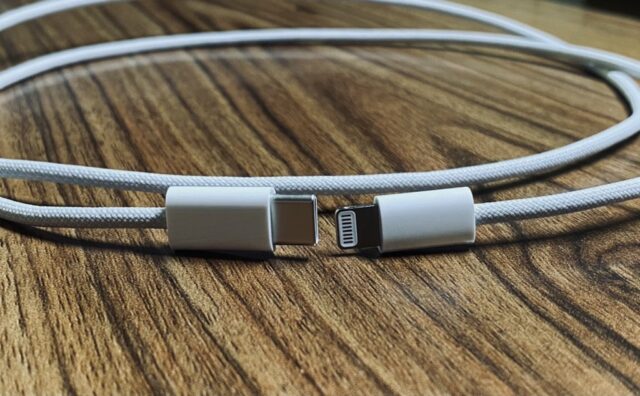 It’s been rumoured that Apple’s upcoming iPhone 12 will ship with a new braided Lightning to USB-C charging cable. New images have surfaced online, giving a close and detailed look at the braided fabric surrounding the cable.

According to MacRumors, it’s been speculated that Apple may transition away from its traditional designed charging cable for a couple of months. In a new report, Twitter user @labaiTD has posted a series of photos showcasing the Lightning to USB-C cord.

The photos clearly depict a Lightning to USB-C cable with a defined braided material running throughout its length. While Lightning to USB-C isn’t necessarily something new to Apple, the more durable braided design is a welcomed feature. A common complaint of the traditional rubber-coated cables is that they have the chance to bend and break away from the edges over time.

In 2019, Apple introduced a Lightning to USB-C cable with its traditional non-braided material. It was introduced alongside iPhone 11’s higher-end Pro models to provide fast charging with the USB-C power adapter. Third-party accessory sellers have also been selling braided Lightning cables for years. Though, most supply Lightning to USB-A.

It’s still unknown if all iPhone 12 models will be shipped with a braided Lightning to USB-C cable. In fact, this cable may be the only accessory included in the box. In the past, it’s been heavily rumoured that Apple will not include a power adapter unit or EarPods in the box. The reasoning behind it is Apple may be looking at ways to cut down on costs and reduce the packaging size.