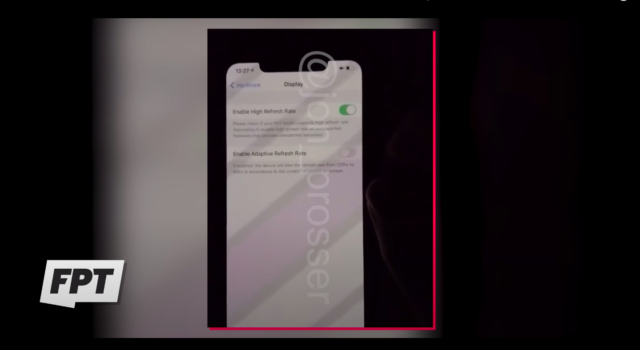 Shortly after releasing a series of tweets, including pictures of an apparent iPhone 12 Pro Max, Apple leaker Jon Prosser uploaded a hands-on video detailing some of the settings, including the details on the apparent LiDAR scanner and 120Hz display.

Prosser debuted his hands-on video to his Front Page Tech YouTube channel. Promising to “dump a lot of info”, Prosser begins by explaining that the iPhone 12 Pro Max unit and software he had hands-on time with was a PVT (Production Validation Test). Seeing as though Apple has not begun to mass-produce its upcoming iPhones, small changes to both hardware and software can still be made.

The first look at settings shows off the iPhone 12 Pro Max’s apparent camera features. Within the camera settings, we can see what looks to be a confirmation that the 6.7″ iPhone 12 Pro Max will indeed have a LiDAR scanner as previous reports indicated. Prosser explains that his source which sent him the screenshot of the settings could not confirm whether the PVT model of other iPhone 12s includes LiDAR as well.

Moving on, Prosser’s video shows screenshots, apparently confirming that the iPhone 12 Pro Max PVT does indeed include the ability to enable a 120Hz refresh rate. Leakers and reporters have long debated whether or not Apple would support 120Hz on the iPhone 12 Pro Max. Prosser also notes that not all PVT models support 120Hz, but “about half of them do”. The important takeaway here is that even though the setting exists on some PVT units, Apple could end up backpedalling by the time mass production begins next month.

To add some validity to Prosser’s sources and aforementioned screenshots, Prosser included a video of a source going hands-on with what is believed to be the iPhone 12 Pro Max. The person in the video shows off the settings page for both display and camera.

While the PVT unit in the video is being shot in a dark room with a “stealth” case on, we’re able to get a good look at the notch. Prosser notes that while the notch may seem a bit smaller, it’s only an optical illusion created by the larger display size. In fact, the camera array on the near-final build of the iPhone 12 Pro Max is apparently “unchanged”. FaceID is said to be faster and can unlock the device at a variety of wider angles. Bezels are also thinner on the iPhone 12 Pro Max.

While the evidence is fairly convincing, it is always worth taking leaks with a grain of salt until official confirmation. At the end of the day, pieces of the hardware and software could be changed before mass production. That said, don’t be surprised if only minor tweaks are made before the official release.