Apple’s iTunes U, the world’s largest online catalog of free educational content from top schools and prominent libraries, museums and organizations, surpassed the one billion downloads milestone the company announced on Thursday. 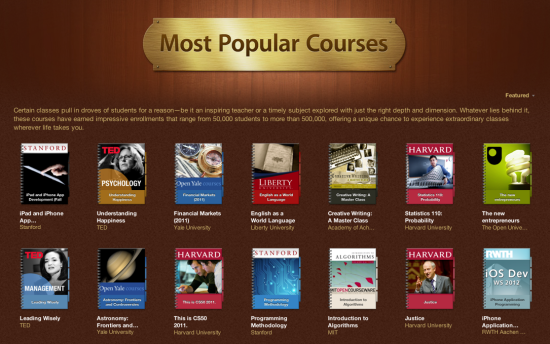 As the press release points out, more than 1,200 universities and colleges and 1,200 K-12 schools and districts have published thousands of private and more than 2,500 public courses in different categories such as arts, sciences, health and medicine, education, business and much more.

“It’s inspiring to see what educators and students of all types are doing with iTunes U,” said Eddy Cue, Apple’s senior vice president of Internet Software and Services. “With the incredible content offered on iTunes U, students can learn like never before?there are now iTunes U courses with more than 250,000 students enrolled in them, which is a phenomenal shift in the way we teach and learn.”

Universities choosing iTunes U as their channel to reach the millions of iOS users across the globe include Duke, Yale, Cambridge, MIT and Oxford. Stanford University and The Open University each surpassed 60 million content downloads, while the Ohio State University’s Matthew “Dr. Fus” Stoltzfus’ General Chemistry course enrolled more than 100,000 iTunes U students during its first year of availability.

Interesting to note, more than 60% of the iTunes U app downloads were initiated outside the US, demonstrating that participating universities can share their courses with a worldwide audience effectively.

Apple’s iTunes U has become a global “university”, as educators can create iTunes U courses in 30 countries, including Brazil, South Korea, Turkey and United Arab Emirates. Courses can be accessed through the app in 155 countries.