After “home run” products such as the iPod, iPhone, and iPad, Apple’s next product category may be only a “single”, or maybe a “double”, an analyst claims. In a note to investors issued by Rob Cihra of Evercore Partners and obtained by AppleInsider, the analyst reflects on the state of the iPad and iPhone, saying it is nearly impossible to replace the iPhone’s success, especially as the handset accounts for about half of the company’s revenue. 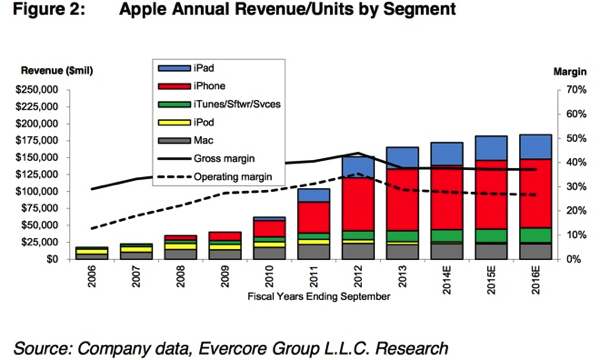 Cihra joins the list of analysts anticipating the launch of the iWatch, and he believes the device could add about 5% to the company’s revenue. Another projected revenue stream could be the 12-inch iPad, now rumoured to be on hold. He believes the target market of a bigger-screen iPad could be enterprise customers.

The analyst also sees new opportunities for the iPhone maker in advertising and e-commerce related to its 600 million active iTunes accounts and connected credit cards.

But before jumping to conclusions and raising expectations, Cihra warns investors not to expect blockbuster products like the iPod, iPhone, and iPad were. He does believe, though, that Apple is able to increase net profit and keep the company growing in the future.