While Apple is already working hard to clean up the mess it’s made with the iOS 6 Maps application, Google subsidiary Motorola Mobility has taken the opportunity to mock the Cupertino tech giant with an advertisement pushing the phrase “#iLost” on Twitter, as pointed out by Apple Insider. 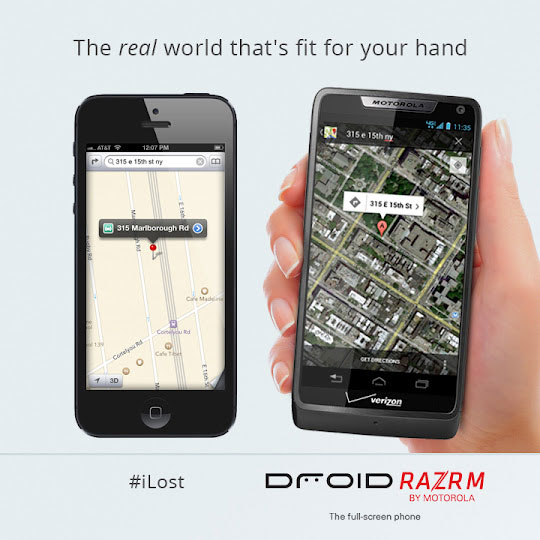 In a new Motorola Droid Razr M ad, the iPhone 5 is shown side by side with the Droid with the caption saying “the real world that’s fit for your hand.” Both phones are shown searching for the address of 315 E 15th in New York City, but Apple’s iOS 6 Maps return an incorrect result (shown above). On Motorola’s official Google+ page, the company said that “Google Maps on DROID RAZR M will get you there & not #iLost in Brooklyn“.

In response to the growing customer dissatisfaction with iOS 6 Maps app, Apple has already released a statement acknowledging all the issues and has assured that the service will get better with time as people continue to use it.