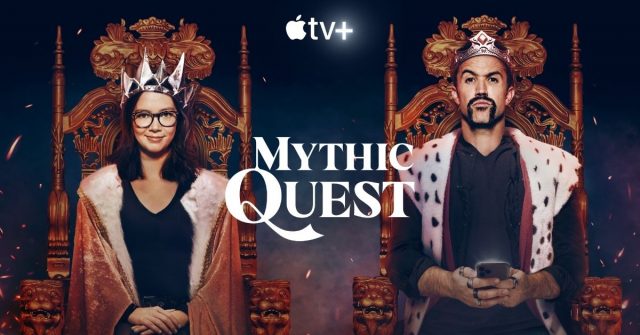 A second special episode of Apple TV+’s ‘Mythic Quest’ is now available to stream. ‘Mythic Quest: Everlight’ reunites the cast in a half-hour special which debuted before the premiere of the second season.

Last year, ‘Mythic Quest’ released a supplemental ‘Quarantine’ episode, showing the cast of game developers reeling with the hurdles of working from home and adjusting to the “new normal”. Filmed on over 40 iPhones, the episode was praised for its realistic and emotional depiction of coming to terms with the pandemic. A second special dubbed ‘Everlight’ has released and shows the characters making their way back into the studio and adjusting to normalcy for the company’s annual Everlight party.

‘Mythic Quest’ stars Rob McElhenney, who also co-created the show alongside Charlie Day and Megan Ganz. The cast also includes Charlotte Nicdao, Ashly Burch, Jessie Ennis, David Hornsby, Danny Pudi, and F. Murray Abraham. The ‘Everlight’ special was written by Burch and directed by McElhenney and features a guest appearance from Sir Anthony Hopkins. The show is produced by Ubisoft Film & Television. The company has also helped develop assets for the show and consults on story beats to help portray a realistic depiction of game development.

The second season of ‘Mythic Quest’ drops on Apple TV+ on May 7th. The first season was focused on the development of a fictional game titled Raven’s Banquet. Season two focused on the team attempting to develop a new expansion for their game and live up to the success of their title.

Apple recently launched its iPhone 14 series of devices, introducing the new 'Plus' model to the fold. The 6.7-inch device joined the standard iPhone 14 as part of the entry-level offering. However, prior to its official reveal, the iPhone 14 Plus looks to have been called the 'iPhone 14 Max.' According to Dutch blog iCreate (via...
Steve Vegvari
15 hours ago