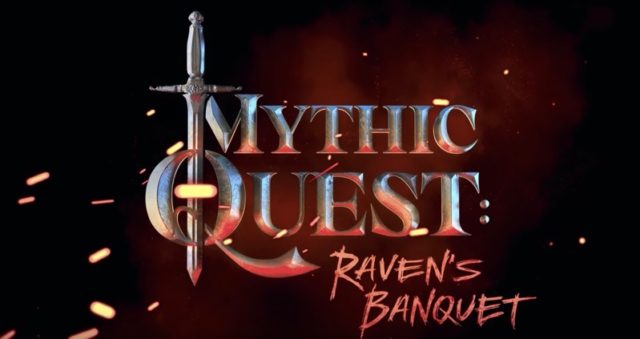 During an interview with the Hollywood Reporter, creator and star Rob McElhenney explained that the episode was conceptualized, written, filmed, and edited in three weeks. McElhenney also detailed how the filming was completed.

In mid-March McElhenney discovered that, like most other productions and businesses at large, Mythic Quest: Raven’s Banquet’s production would be put on hold due to the COVID-19 lockdown. With much of the show’s cast and crew out of work in late April, McElhenney came up with an idea. Mythic Quest would do a one-off special where the cast, crew, and everyone involved could remain safe in their homes.

Rather than create ideas for a new season of the show, or work on a new project altogether, McElhenney approached his bosses at Apple with the idea and a concept for the episode. Brainstorming with co-creator Megan Ganz and executive producer/star David Hornsby, the trio came up with the idea of having the fictional video game development team struggle with the real-world lockdown orders. The episode is said to incorporate Charlotte Nicdao’s character Poppy “struggling with forced solitude” and F. Murray Abraham’s C.W. “struggling with teleconferencing tech”.

The quarantine episode will also incorporate a storyline revolving around a charitable donation. Replicated in real life, $600,000 was raised to go towards the global NGO Mercy Corps’ COVID-19 relief program.

In order to execute this idea, McElhenney reached out to the Apple team in Cupertino, California and requested 40 iPhones and 20 sets of earbuds. After confirming the order, the episode was written, shot and edited in three weeks.

Filming the episode required a few unorthodox measures, but it ensured a rapid turnaround while keeping the crew safe. McElhenney explained:

“Yeah, you’d open your laptop and would call into Zoom — there would either be five people on there or 45, depending on what the scene or situation was. The way we’d capture the image and the sound was through iPhones. Each actor had three iPhones, and we’d shoot one iPhone at a time. As soon as a scene was wrapped, the phone would be sterilized, packaged, put in a secure area, picked up [by a courier] and brought to editorial, sterilized again, and then the footage would be uploaded to the Avid for the editors, who were working from their homes.”

The quick turnaround was done in order to take advantage of the current situation many of us find ourselves in. To create a relatable piece of media, the Mythic Quest cast and crew were firing on all cylinders.

McElhenney told the Hollywood Reporter: “I really wanted to get it out as quickly as possible so that it was something that we’re all going through in the moment, not something we went through in the past. I also felt like there was an opportunity to delve into some of the darker elements of what’s going on. To see some of the struggles and then ultimately end in triumph with a sense of community and optimism.”

‘Mythic Quest: Quarantine’ will be available on Apple TV+ on May 22nd.