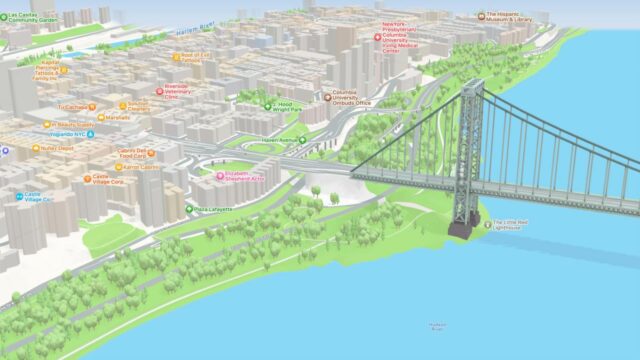 Apple Maps has been given a new treatment with the target of making Apple’s app competitive to users once again. When speaking to CNN Underscored, Apple Maps product lead David Dorn and design lead Meg Frost got to discuss the latest and greatest features.

Apple has struggled to maintain the relevance of Apple Maps when Google Maps and Waze led the charge on iOS. Now, Apple has rolled out the all-new 3D Maps and hopes to provide better visual details when navigating areas, and improved accuracy. On top of that, the new Maps also includes quality of life improvements for users.

3D is a big addition to the Maps apps. It’s allowed for further details to run across the app. From trees to accurate roads and beyond, Apple has gone above and beyond to increase the quality of the map by adding such details. This translates to a more accurate representation of the sights a user will see when travelling. Road markings and lanes can now be accurately displayed through the app, making turns easier to determine.

“Before the new map, we had a two-dimensional product and we really had a flat representation of the world. So we took the opportunity to create a realistic globe that accurately represents the sizes of countries in 3D,” said Frost.

The Apple team also discussed how the app was safer to use and more enjoyable to use as well. Ensuring that split-second decisions could be made at a glance, without having to take their attention off the road, was key.

“At a glance, drivers can understand a complex intersection more quickly than ever before,” said Frost. “And that detail helps with that split-second decision of which turn they’re going to make. So we want it to be both safer and visually satisfying to navigate.”

“We pick the amount of detail we find appropriate and create a 3D mesh of the building landmark itself. And we apply it to the base map,” explained Frost.

Landmarks have also been overhauled to provide more details. Apple sees the scale on which details can be rendered a useful educational tool. The company also touts that it is the first to put that amount of detail in recreating monuments and structures over Waze and Google Maps.

As with the previous Maps app, iPhone, iPad, and Apple Watch users will gain hands-free experiences when using the app and its navigational tools. However, other core Apple products have Maps integration such as the HomePod Mini, CarPlay, and AirTags.

It’s nice to see Apple becoming competitive with its Maps app once again. Whether it will win back an audience that has gotten used to the competition remains to be seen. Though, the new features will go a long way for the user.