With each new release of iOS, Apple puts hard work into entering the enterprise market, and as you may have already guessed, Samsung is standing in line to find a spot for a successful entrance. 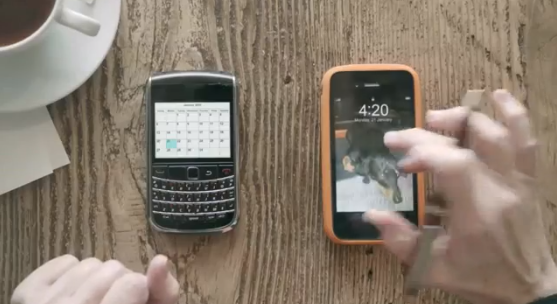 It’s new, one minute thirty-one second commercial focuses on the enterprise features of the Samsung Galaxy S III and Galaxy Note II, but the South Korean company just can’t help but bash the iPhone and BlackBerry at the same time.

The problem is the ad fails to be funny, while it aims to promote the enterprise features the Samsung devices ship with. At the end of the long ad — and 91 seconds can be very long — it leaves you scratching your head asking yourself: wha’?

During the video, we see some great business features, such as secure encryption, S Beam, and multi-window, but Samsung needs to understand that poking fun the iPhone and BlackBerry isn’t as good for business as the marketing team may think.

As a comparison, you can visit the Apple page for business, where you’ll notice an obvious difference between how the two companies present their enterprise features [Apple / Samsung]. Just a side note: while the Samsung ad focuses on pushing more and more info into the ad, Apple focuses on delivering a clear message.

Check out the Samsung ad below: