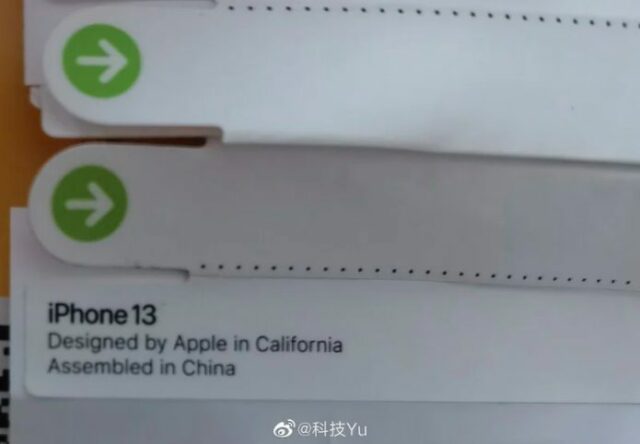 A photo depicting an alleged packaging sticker made for the ‘iPhone 13’ seemingly confirms the device’s name ahead of its tentative reveal next month.

Apple has remained hushed on what the next iPhone will be called. Though, for all intents and purposes, the community and industry have been running with the name ‘iPhone 13’ as it wasn’t a stretch to believe the company would it. Now, as reported by MacRumors, iPhone 13 branding has now been seen on alleged packaging.

On Twitter, DuanRui published a photo that emerged on the Chinese social media network Weibo. The photo in question allegedly shows a packaging sticker with the name “iPhone 13” on it with ancillary text like “Designed by Apple in California” and “Assembled in China” as well. DuanRui also claims to not be a leaker, and that there is no information on the validity of the photo.

Let me emphasize again that I am not a leaker. I don’t have first-hand information. I just reprint some information that I have seen that I feel is relatively reliable. pic.twitter.com/Avy9ndDT4Q

With the iPhone 13 expected to launch sometime next month, it’s not surprising that pertinent information such as this would begin to leak. Reports have often used the iPhone 13 name while discussing its improved camera modules and faster processor. As with the iPhone 12, this year’s Apple smartphone is said to be offered in a variety of models including iPhone 13, iPhone 13 Pro, iPhone 13 Pro Max, and iPhone 13 Mini.

Recently, rumours were abound stating that the iPhone 13 may launch in the third week of September.

Amazon will reportedly resume advertising on Twitter with an estimated increase in ad spending of $100 million USD (roughly $134 million CAD) annually. News of this quickly follows as Apple is said to be resuming its own advertising on the social media platform. The news comes by way of Platformer's Zoë Schiffer, who states...
Steve Vegvari
19 hours ago