Samsung And Apple Retain Almost Half of The Smartphone Market

Gartner has just published its quarterly report covering global mobile phone sales according to operating system and manufacturer. While sales dropped 3.1% during the third quarter of 2012 compared to the same period a year ago, smartphone sales experienced a 47% spike, rising to 169.2 million units in Q3. 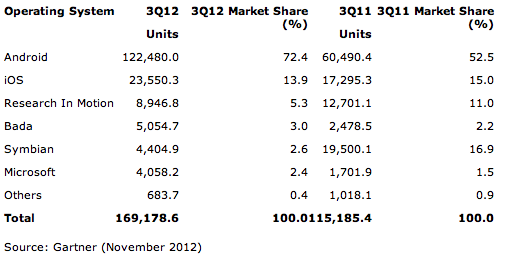 In terms of mobile OS’s, the race between Android and iOS shows Android has gained traction: Android now accounts for 72.4% of the global market, while iOS retains only 13.9%, down from 15% recorded last year.