Samsung unveiled its latest flagship smartphone the Galaxy S4 yesterday in New York’s Radio City Music Hall, but the majority of Apple analysts have remained with the impression that the updates were more evolutionary than revolutionary, as CNET notes. 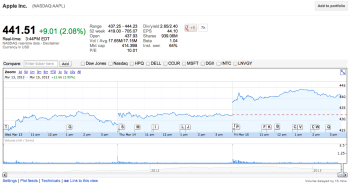 Fact is the phone looks very similar to the Galaxy S3, but it indeed has several improvements like the 441ppi display [sic], 13MP camera and other components, as well as software updates.

In other words, the hype surrounding “The Next Big Thing” had a somewhat artificial feeling, as the “thing” is indeed big – it sports a 5-inch display – but missed the wow-factor. And Apple’s shareholders reacted immediately to the “thing” as Apple’s stock price was up 2.5% today when the overall stock market has been trading in red. 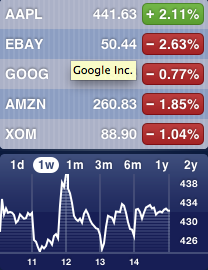 The fear of Apple losing its mojo against the rapidly growing South Korean manufacturer seems to have no confirmation: The big event has ended and consumers remain with the device, which, by the way, has no official battery life data, no price, etc., just the proposed April launch.

Also, the reviews seem to be respectful instead of breathless about the Galaxy S4. That’s why Apple’s shares are up today, as analyst reviews began to surface:

“While the S4 is likely to be the iPhone’s biggest competitor this year at the high end of the market, we remain confident in our iPhone estimate for this year of 177.5 million, which includes a cheaper phone in the September quarter,” wrote Gene Munster of Piper Jaffray.

“We believe the S4 will certainly sell well and it is incrementally negative for Apple,” Misek said. “However, the device is not revolutionary, in our view.”

Following an extensive ordeal, the lockdown at Foxconn's 'iPhone City' Zhengzhou plant has now ended. Though, it's being reported that the disruptions in production are costing Apple an estimated $1 billion USD per week. Foxconn's Zhengzhou plant is Apple's largest iPhone manufacturing facility. In charge of producing the iPhone 14 Pro and iPhone 14 Pro...
Steve Vegvari
3 hours ago