Samsung’s president of consumer electronics division Yoon Boo-keun was quoted a few weeks ago by Korean Times saying that we will innovate and “raise the quality of our products and services by pressing further for software, design and solutions”, something that company has apparently learned following the great loss in patent dispute with Apple. Ironically, Samsung has just begun developing a new browser for mobile devices, using Apple’s open source WebKit software (via Patently Apple). Wow, how innovative! 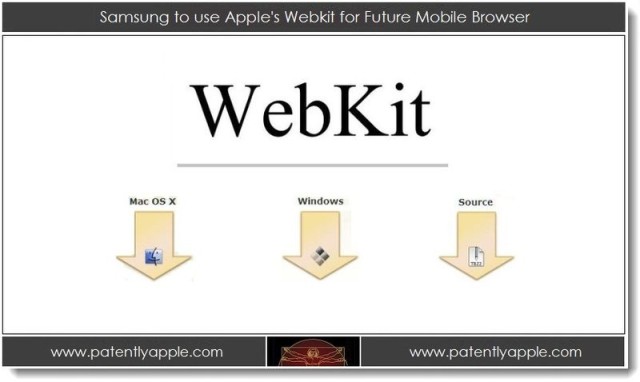 WebKit, a software developed by Apple engineers, is an open source engine that simplifies web development. As stated on Apple’s website:

“Introduced by Apple engineers, WebKit simplifies web development and accelerates innovation. An open source engine, WebKit is free for anyone to use.”

Apple filed for a trademark to protect it in May 2010 which was challenged in Canada by RIM (Research in Motion) in August 2011. However, the Canadian IP Office granted Apple the WebKit trademark on January 05, 2012, according to the source.

So no matter how Samsung spins this, their future browser will be using technology that originated with Apple engineers in collaboration with KDE team members. Apple’s registered trademark will act as a constant reminder as to who brought WebKit to market.

Looks like Samsung is copying Apple again, only this time it’s legal.