Several reports in the past have suggested that Apple’s rumoured iPad Mini will sport Sharp’s IGZO display, which is basically a new TFT technology that allows a tablet to be thinner than similar models, while improving display quality. Today, folks over at 9to5Mac had the opportunity to visit Sharp’s IGZO display booth at IFA Berlin and it seems they’re quite impressed with its smooth touch operation and thinner bezels. 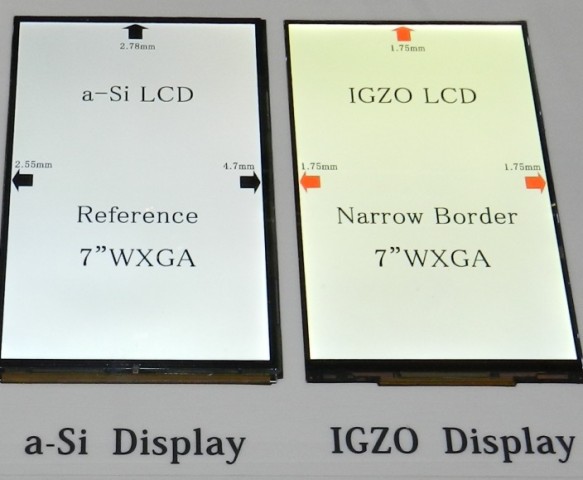 The source reports that Sharp didn’t mention which Apple products would incorporate their new displays, they did claim that these were the best displays on the market and “Apple is the type of company that uses the best displays”.

For one, they can be built with under a 2mm bezel. That means that companies like Apple will be able to increase the size of displays on mobile devices while keeping the overall size of the device as compact as possible.

Next, Sharp was showing off the benefits of low power consumption with its IGZO displays by demoing the technology’s ability to consume 1/5 to 1/10 of the power consumed by a-Si displays. IGZO consumes less power for both backlight and driving the panel itself, allowing for longer lasting and smaller batteries in mobile devices.

What’s most impressive about Sharp’s IGZO displays is their silky smooth touch sensitivity and much lower level of noise as compared to other displays with similar pixel density, leading to precise input and extremely responsive touch operations. Sharp claims that it is now ready for full-production of the first round of IGZO panels.