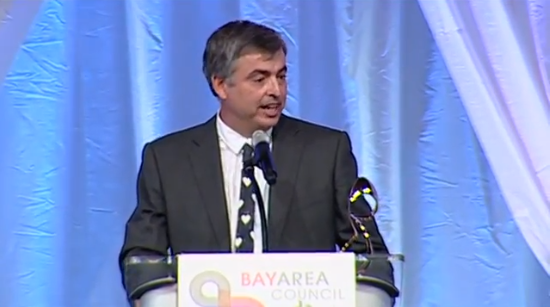 Two years after he passed away, Steve Jobs was posthumously inducted into the Bay Area Business Hall of Fame. Eddy Cue participated at the ceremony, accepted the award, and gave a speech about Apple’s co-founder and friend (via TechCrunch).

He also tweeted a link to the video uploaded by the Bay Area Council — see it below — which has gathered Steve Jobs’s noteworthy innovations. Following the montage, in an emotional speech, Cue shares with the audience how they become friends and helped him in “his darkest days,” when his wife fought with cancer.

During his speech, Eddy Cue remembers that he learned a lot from Jobs, but the most important thing was “do what you love”. This is what Steve Jobs did every day and he has placed the benchmark very high: Jobs just couldn’t accept anything less than perfection.

He taught me many things but none more important than ‘do what you love’. That’s what he did every day. It wasn’t about fame, it wasn’t about fortune, it was about creating great products. And not accepting anything less than perfection. As I was coming in today, I was trying to remember a story of the first time I learned that from Steve. We were launching the iMac, in Bondi blue…we were doing this at the Flint center in Cupertino. Unfortunately we couldn’t get the venue, Stomp was there the night before, we were launching it the next day and we could only get in at midnight. So we come in at midnight, we were going to do rehearsals…one of the things we wanted to do was have the iMac come out from the stage as he was introducing it. And we’d shine some lights. I was sitting out in the crowd…and the iMac comes out and the light comes on it and I said “wow, that is so cool!”

Cue also mentioned that Jobs’ induction into the BAC Hall of Fame would have been important for him because of the strong connection with Bay Area.

As part of its continuing production diversification initiative, Apple has ordered for a portion of its AirPods and Beats headphones to be manufactured in India. Apple has begun to double down on manufacturing its devices in India. As a way to lower its dependence on China, Apple has made an order to its suppliers to...
Steve Vegvari
22 hours ago