Apple’s co-founder and former CEO topped CNBC’s First 25 “Rebels, Icons and Leaders” list, which contains the names of influencers who have had the “most profound impact on business and finance since 1989, the year CNBC went live”.

Steve Jobs, Apple’s iVisionary, ranks #1 on the CNBC list due to his work at Apple and his vision that not only influenced his industry, but also put a dent in the wider culture, CNBC notes.

His creative genius revolutionized not just his industry and its products, but also everything from music and movies to smartphones. He provided a platform for others to create and distribute apps, bringing innovation and change to an even wider sphere. Apple’s co-founder tops our anniversary list of the 25 most transformative leaders, icons and rebels of the past-quarter century. More than any other member of our group of extraordinary entrepreneurs and executives—all outstanding leaders—his vision spurred changes far beyond his industry and put an indelible stamp on the wider culture.

To put together the list, the guys from CNBC cut out money as a unit of measurement and heads of government, and picked up only those men and women who have influenced the markets during the quarter of a century that CNBC has been live.

We made the decision early on to eliminate heads of government and state from our deliberations. This is a list, after all, about business people, not politicians. It’s about the men and women who, for better or worse, have had the most transformative effect on commerce, finance, markets, human behavior and global culture over the past 25 years. So out went Bill Clinton, Angela Merkel, Jiang Zemin, Hu Jintao, Lee Kuan Yew and Vladimir Putin. In came Oprah. 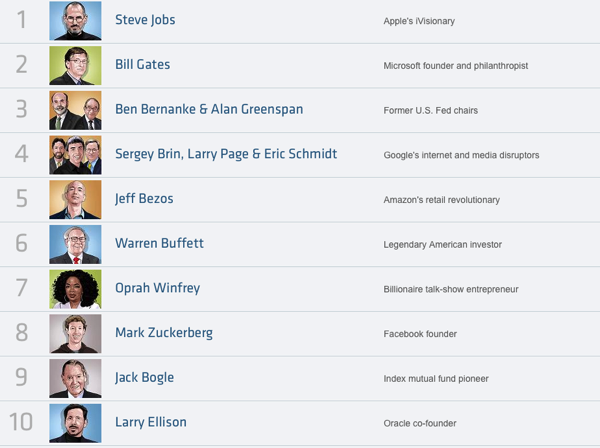 December 1st marks World AIDS Day and Apple is continuing to support Global Fund in its worldwide fight to stop AIDS. In doing so, Apple Stores around the world are promoting (PRODUCT)RED displays and products. Additionally, Apple is promoting apps, videos, and other materials on its products to help increase visibility. Since 2006, Apple has...
Steve Vegvari
5 hours ago