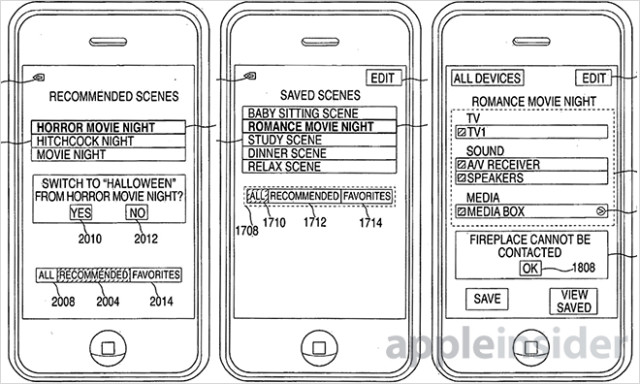 A recently published Apple patent spotted by AppleInsider reveals that Apple is working on a system that transforms the iPhone into a device that can save and manage smart home system settings dubbed as scenes. This goes way beyond what we know as the Remote app.

US Patent No. 8,519,820, for “Systems and methods for saving and restoring scenes in a multimedia system”, describes a system driven by an intelligent universal remote, connecting to multiple A/V components and smart home devices such as lights and window shades, using different protocols.

What Apple proposes: the smart device receives information from separate components regarding their operating state, and that includes both hardware and software settings. This would ease the manual setting of the remote, as the currently available universal remote controls do allow scene selections, such as “play game” or “play movie”, but they are unable to suggest television, stereo, or lighting settings. Furthermore, the user must set up the components of the scene and specify the settings, and only then can they finally activate the scene.

The Apple system would make this process easier, and goes further: it can also detect usage patterns and metadata associated with a certain scene. Since the system gathers this data, it can suggest settings recommendations in certain embodiments. It can also track the times and frequency the saved scene is accessed.

In terms of metadata, the patented system can detect identifiers such as the name of a song or “horror movie”, and can then search for a proper scene setting in its database of saved scene settings.

As with every Apple patent, we don’t know when or if the above system will be implemented, although this smart home remote sounds good.

The patent was first filed five years ago by the developer who coded the first iTunes Remote iOS app, Alan Cannistraro.