This Elephant Thinks the iPhone is Crap [VIDEO]

A spot of humour for today: In a video that went viral, a Thai elephant expressed its thoughts about the most sought-after gadget in the world, Apple’s iPhone — well, sort of. Since the elephant couldn’t speak English, it used sign language. It swallowed a Chinese visitor’s iPhone while she was immortalizing how her friend was feeding the animal with bananas. 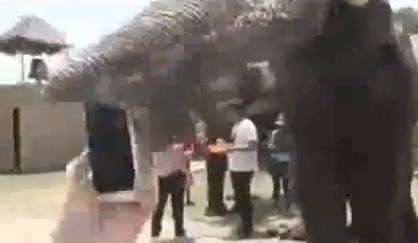 As you can see from the video below, the Chinese visitors were having fun until the elephant grabbed the iPhone from the girl’s hand and put it in its mouth. But the fun part comes just afterwards: The iPhone was later recovered from the elephant’s dung, being the elephant’s “final words” about technology and gadgets.

Some skeptics have pointed out that the two phones were not identical. What is certain, though, is that when called by the Chinese girl, the phone is ringing in the elephant’s dung, and that at point, it doesn’t matter if the whole video is just a play. Enjoy!