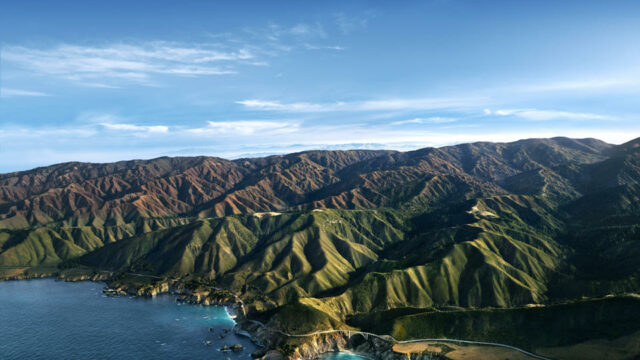 Three friends embarked on a mission to recreate Apple’s macOS Big Sur wallpaper. The group including YouTuber and photographer Andrew Levitt was joined by Jacob Phillips and Taylor Gray to recreate the new macOS wallpaper shortly after its unveiling at WWDC.

The group had previously gone out and shot recreations of the macOS Catalina on Catalina Island. They have now successfully recreated all of Apple’s default wallpapers. According to MacRumors, the group set out once more following WWDC within a week’s time with no preparation, just one goal: recreate Big Sur’s wallpaper.

This was no simple task for the group. Big Sur’s wallpaper showcases California’s Central Coast. The official photo was taken at an elevation of 4,000 feet over the ocean. That said, the trio of friends didn’t back down from the challenge.

The group did some mild research and determined that the photo wouldn’t be viable to take with a drone. On top of that, restrictions are currently in place that forbids the flying of drones over the Big Sur coast. And so, Levitt, Phillips, and Gray contacted a local helicopter pilot to assist them in capturing the shot. Through some sort of divine intervention, the pilot turned out to be the same pilot who flew Apple’s photographer over the coast to capture the image.

Weather conditions and fog proved to be a hurdle for the group. But after a second attempt, the Big Sur wallpaper was finally recreated.