The Charitybuzz auction for a coffee date with Apple CEO Tim Cook currently sits at $605,000, with about an hour remaining to bid. The auction was launched at the end of April and bidding quickly ballooned to $600,000 a few days later, with even a top bid made using a stolen credit card but later rescinded. 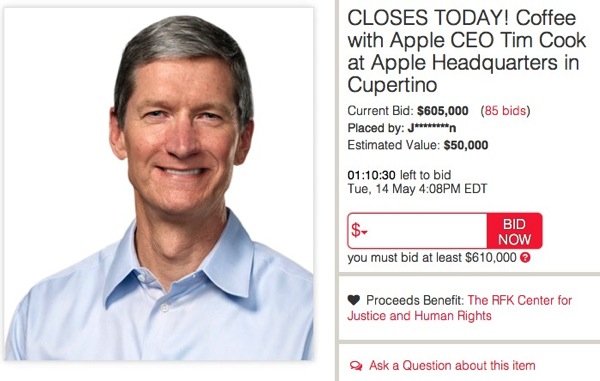 The auction description now states “additional bank qualification is required for bids placed over $500,000” and requires bidders to contact customer support. I wonder how many eBay-like ‘auction snipers’ are out there waiting until the very last minute to bid.

Proceeds for the auction will benefit The RFK Center for Justice and Human Rights. The winner will have approximately 30 minutes to 1 hour with a guest to enjoy coffee and a chat with Tim Cook.

Apple is reportedly scrapping its initial plans to increase iPhone production this year due to lower-than-expected demand. Following the launch of its new flagship, the iPhone 14 series, Apple is now reconsidering the scaling of its production. As reported by Bloomberg, Apple has reached out to its supply chain partners. Initially, the Cupertino company is...
Steve Vegvari
9 hours ago

Logitech is launching a brand new line of 'Designed for Mac' keyboards and mice. The announced products are specifically aimed at servicing Logitech's Apple users. The lineup of 'Designed for Mac' devices includes the MX Mechanical Mini for Mac Keyboard. This keyboard offers the traditional Mac layout. It features backlit keys and is USB-C rechargeable....
Steve Vegvari
10 hours ago