Tim Cook is set to provide an exclusive interview to NBC News and Brian Williams on Rock Center, the hour-long primetime news magazine. In an early preview segment, Williams talks briefly about his day spent with Cook about one of the first ever interviews granted. He mentions unlike Steve Jobs, Cook was able to walk across Grand Central Station without being recognized, only until he reached the Apple Store “he was treated like a rock star” by fans and staff.

Earlier today, a TVNewser fan spotted Cook and Williams in an interview and posted the following picture: 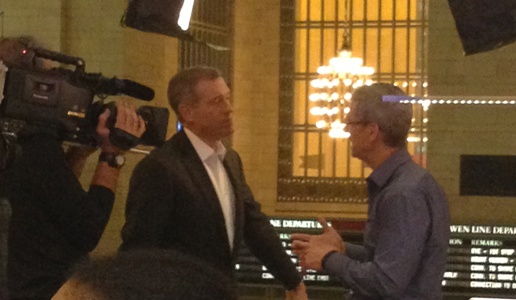 The @RockCenterNBC twitter stream notes this will be the first TV interview for Cook and will air on December 6th. Check out the following teaser below (NBC Flash video):

Following an extensive ordeal, the lockdown at Foxconn's 'iPhone City' Zhengzhou plant has now ended. Though, it's being reported that the disruptions in production are costing Apple an estimated $1 billion USD per week. Foxconn's Zhengzhou plant is Apple's largest iPhone manufacturing facility. In charge of producing the iPhone 14 Pro and iPhone 14 Pro...
Steve Vegvari
9 hours ago