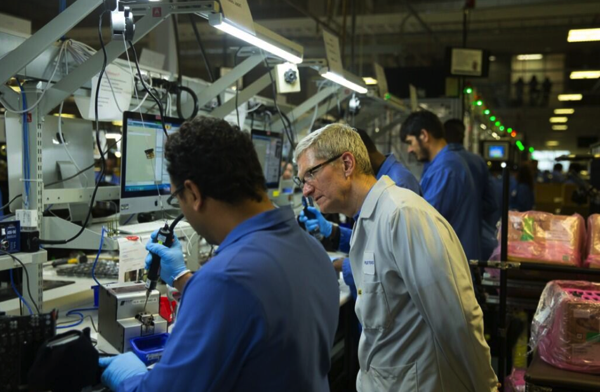 Apple CEO Tim Cook is spending quality time in Austin: after visiting the company’s new campus, he went to Apple’s nearby Mac Pro assembly plant and tweeted an image of his trip there.

Our AppleCare team is the best in the world. Thrilled to see them in action yesterday on our new campus in Austin. pic.twitter.com/fTaMKzMi9o

You may recall that Tim Cook emphasized how much it means to Apple to bring back manufacturing to the US. And it seems like it can better control leaks as well – have you seen any Mac Pro leaks?

Watching the Mac Pro come together in Austin yesterday,thanks to a team loaded with American manufacturing expertise.

Apple’s partner in manufacturing the Mac Pro is Flextronics, a company which hired up to 1,700 workers at their Austin, Texas, facility last fall to build the next-generation desktop computer. It is worth noting that Flextronics spent tens of millions of dollars renovating its Austin factory.

Producing the Mac Pro was a huge step for Apple, and Tim Cook was eager to mention that in his tweets.

In today’s tweet, we can see Tim Cook observing how the Mac Pro comes together. What captured the attention of the guys from BusinessInsider is that the iMacs in the Austin factory are apparently running Windows. But don’t be shocked; this isn’t the first time we have seen Apple computers running Windows. Foxconn uses Windows, too, as the applications they use are apparently Windows-only.