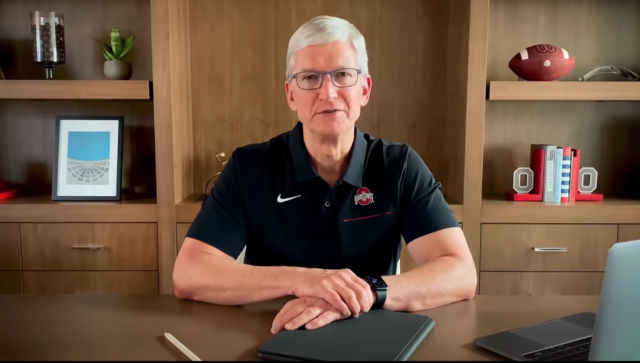 Reported by MacRumors, a seven-minute video was published on the Ohio State News YouTube channel. The video saw Cook in what looks to be his home office, surrounded by Ohio State memorabilia.

Cook opened his speech by saying: “Graduates, I am sorry that we’re not celebrating together today. Your class is a special one — marked by history like few others in OSU’s 150 years. And while we aren’t shoulder to shoulder in the Horseshoe, filling it to the rafters, I know your parents, your loved ones, your friends and teachers are no less overwhelmed with the pride in you and in what you have achieved.”

Later, he touched on how brilliant and influential individuals such as Franklin D. Roosevelt and Amelia Earhart were able to make an impact on the world during the 1918 flu epidemic.

Finally, Cook described how lucky he was to find himself working for Apple. Although there were challenges along the way, he fondly looks back at his time starting with the company in 1998.

Cook said: “When I joined Apple in 1998, I couldn’t believe my luck. I was going to spend the rest of my professional life working for Steve Jobs. But fate comes like a thief in the night. The loneliness I felt when we lost Steve was proof there is nothing more eternal, or more powerful, than the impact we have on others. Those of us who can look back on this time and remember inconveniences and even boredom can count themselves lucky. Many more will know real hardship and fear. Others still will be cut to the bone.”

The Ohio State University event also featured musical performances and officials at the Ohio Stadium, which was otherwise empty of students.