Back in Spetember, Apple’s stock (AAPL) broke the $700 per share barrier just before the launch of the highly anticipated iPhone 5, with analysts predicting that the stock would soon hit the $850 mark. However, Citi’s Apple analysts, Glen Yeung, Walter Pritchard and Jim Suva, have radically cut the price target for Apple Stock to $575, and are rating it neutral down from buy, Business Insider is reporting. 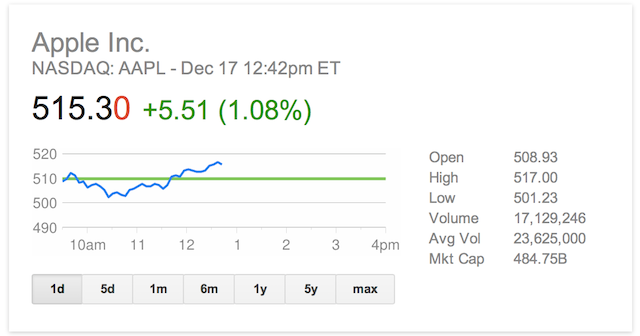 The same trio of analysts from Citi previously rated Apple as a buy because they believed there would be raise in stock price, following strong iPhone 5 sales. But now, the Wall Street analysts no longer think iPhone 5 sales are going to be strong enough to prop the stock. Similarly, UBS and Jefferies have also cut their price targets. The source notes that all three banks are cutting their price target for essentially the same reason.

There are reports from Asian supply chain sources that Apple has cut orders for the iPhone 5 in the first quarter of the year.

These iPhone 5 order cuts are a mixed bag. Apple is naturally going to cut its orders following a holiday quarter. However, these cuts are bigger than expected.

Citi says, “Our checks suggest Apple has seen a 45-50% increase in monthly iPhone 5 production output October to December.” This improvement was better than expected for Apple, which is why it’s cutting its orders for the first quarter.

The analysts also said that “Samsung is still crushing it” and is a big risk for Apple.